At 6am on a cold, snowy Saturday the CVM team loaded up, dug out and set off for Manchester! Despite the snow we managed to arrive just in time in true CVM style for the Manchester Courageous Day. After refuelling on coffee it was lights out and go, go, go, with some immense worship provided by the new wine band!

Carl Beech led the first few laps with a cracking talk from the book of Judges, with the theme of ‘What is your Gilgal?’ Carl asked the guys to home in on what riles them in today’s culture and challenged them to do something about it. Carl then invited blokes to the front if they wanted to give their lives to Jesus. Approximately a dozen guys went up to shake Carl’s hand as they were cheered on by a crowd 600 strong. It was an incredible atmosphere as several hundred of the guys went up and knelt down with them as a sign of camaraderie and servitude to Jesus. 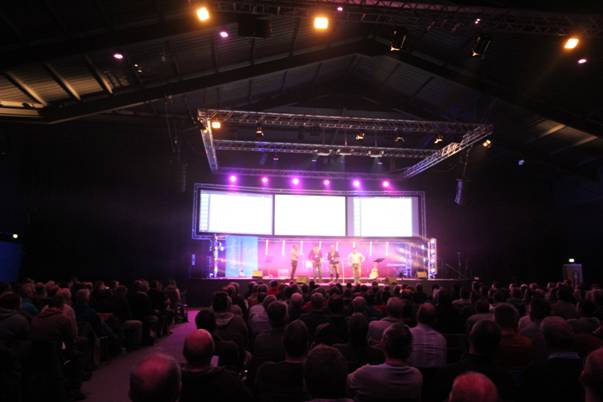 After a quick pit stop, all of the guys were back in the stands as Patrick Dixon took the lead with a talk on Courage. He used several hard hitting examples from his personal experience as a cancer specialist, business consultant and chairman of the charity ACET (AIDS Care Education and Training). He spoke to the guys about how to be more courageous and recognise the opportunities that God can bring about when we have courage and step out in faith.

It was a close race as Ian Parkinson, Ben Harding and Carl led the afternoon seminars. Ian spoke on being an effective leader, Ben on what we can bring to the table as 21st century blokes and Carl talked on how to gear up the church for men.

After the seminars we were onto the final laps as Mark Melluish took the lead with an awesome talk on being defined by Christ and the importance of sharing the gospel wherever we can.

As the chequered flag waved and the stands roared with praise, Christ rightly took first place which let’s face it, he’d had the whole time! It was an EPIC end to a legendary day!

More photos can be seen in our Facebook album